CIVIL WAR IN SYRIA : The Fall Of Aleppo – Analysis 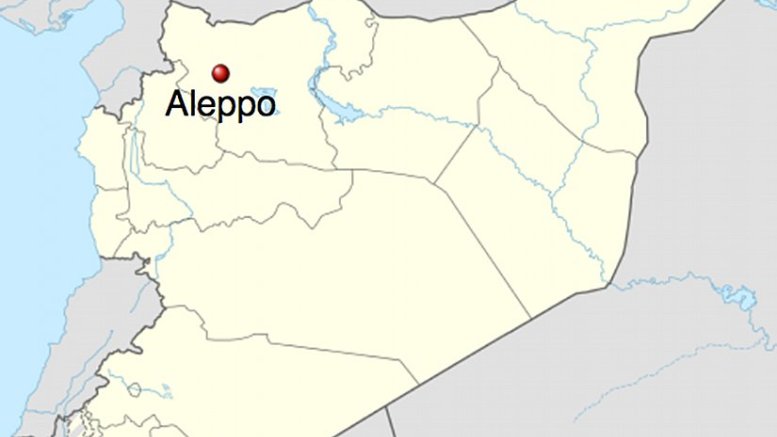 The Fall Of Aleppo – Analysis

In a rapid offensive lasting less than a month, forces loyal to Syrian President Bashar al-Assad have recaptured the last opposition enclave in east Aleppo. On Monday evening, the army cleared street after street as artillery and air strikes pounded rebel positions northeast of Ramouseh district. By midnight, only a tiny speck of territory remained in opposition hands and celebratory gunfire lit the darkened skies over west Aleppo. On Tuesday evening, finally, news came of a deal brokered by Russia and Turkey that would see the remaining rebel fighters evacuate to opposition-held territory outside Aleppo, while civilians were to remain in the city under government control.

The collapse of the east Aleppo pocket marks the end of a four-and-a-half year struggle for control over northern Syria’s largest city, often referred to as the country’s industrial and economic capital.
To al-Assad loyalists, this is a great victory. In an email interview, a source close to the government in Damascus spoke of Aleppo’s “liberation from terror groups”, saying that the restoration of army control would “allow the hundreds of thousands of displaced persons to return to east Aleppo”.
There is clearly a sense of relief among government loyalists in Aleppo, who feel that their city may finally be on the path back to normality. On Monday night, the state broadcaster al-Ekhbariya ran loops of footage from street celebrations in pouring rain, where young men fired in the air and honked their car horns as television anchors handed out chocolates.
But to the Syrian opposition, the fall of east Aleppo is a political disaster that threatens to sap morale and undermine international support for the uprising. Yet opposition representatives struck a defiant tone.
“We can’t ignore the fact that the revolutionaries in Syria have been left alone to face a large group of enemies, including the regime, Hezbollah, Iran, Russia, the militias, and Iraq,” Omar Mushaweh, a Turkey-based leader of the Syrian Muslim Brotherhood, told IRIN in an online interview.
But, like other opposition sympathisers interviewed, Mushaweh gave no hint of wanting to surrender. Indeed, with the al-Assad government’s own weaknesses demonstrated by its recent loss of Palmyra to the self-declared Islamic State, no one is under any illusions: the war will go on.

Beyond the political consequences, however, recent events in Aleppo mark the brutal conclusion to four years of human suffering. To Syrians with friends and family in the collapsing rebel enclave, the past weeks have been a nightmare. All through Monday and Tuesday, desperate messages and pleas for help trickled out from east Aleppo through private contacts and social media. Though many civilians had already managed to flee into government-held western Aleppo, the last days of the enclave saw tens of thousands of people thronging the streets.
“People are moving around and fleeing as they can in a very volatile situation, as front lines continue to shift on a daily basis,” Linda Tom, a spokeswoman for the UN’s emergency aid coordination body, OCHA, told IRIN in an emailed comment on Saturday. Tom estimated that more than 40,000 civilians had already been displaced at that point, with a further 100,000 still in rebel-held territory, though she stressed that all figures were uncertain.*
Médecins Sans Frontières has called the fall of east Aleppo one of the worst crises they have seen in years. For some of the displaced civilians, fleeing meant risking everything – not only their lives, but also their homes.
Though the Syrian government claims to welcome and protect civilians fleeing eastern Aleppo, many pro-regime militias are poorly organised and undisciplined, and they have a history of looting and destroying abandoned property. Even the governor of Aleppo, Brigadier-General Hussein Diab, recently complained about the waves of looting that tend to follow every successful army offensive in Aleppo.
Though the UN has reported allegations that rebel groups forcibly prevented civilians from leaving in an attempt to use them as human shields, UN officials have also received reports that military-age men are being arrested after crossing into west Aleppo. Indeed, many civilians in the rebel zone seem to have held off fleeing to government territory until they simply had no other choice. “They have been killing us for so long, why would they have mercy?” one resident told the Washington Post.
The Syrian government is eager to deny any such abuses.
“Men of military age leaving the east are being checked and having their details taken down as part of the amnesty and reconciliation process,” a Syrian colonel working for the man running military operations in Aleppo, Lieutenant-General Ziad al-Saleh, said in a statement provided to IRIN by an intermediary. The colonel stated that those guilty of “severe criminality” will be tried and judged, but insisted that “the state is open to these people returning to their normal lives”.
Indeed, as much as they may want to completely crush the opposition and avenge themselves on rebel fighters, al-Assad’s men seem to realise that a softer touch is in their interest. Aleppo will be seen as a major test case for the government’s strategy of imposing local truces and forcing the evacuation of rebel fighters to peripheral regions like Idlib, as al-Assad shores up control over central Syria and major cities elsewhere.
Nevertheless, as the rebel pocket finally collapsed on Monday and Tuesday, opposition media filled up with references to Srebrenica 1995 and Rwanda 1994, even to the Holocaust. These claims were not backed up by reporting and even overtly pro-rebel media channels had, at the time of writing, produced no evidence of anything remotely similar to these atrocities. According to a spokesperson, the UN had received reports about the killing of 82 civilians at the hands of pro-al-Assad forces on Tuesday. As horrifying as that is, it is no genocide.
That said, the fears of opposition sympathisers in the city are real. Other deaths may have gone unreported and at this point no one is quite sure whether the evacuation deal will hold or what the future will bring. With no outside monitoring of the situation or of the conduct of al-Assad’s forces, there are great and legitimate concerns about the mistreatment of prisoners and vulnerable civilian populations. This gruesome chapter in Syria’s history is still being written.
* A note on the population statistics  : Throughout the conflict, the number of civilians in rebel-held eastern Aleppo has been hotly disputed. Until the rebel stronghold finally collapsed, the United Nations had put the number of people in the east city at 250,000-275,000. After the attack began, most UN estimates seemed to add up to around 140,000 civilians. On 9 December, I was told by UN OCHA spokesperson Russell Geekie that in the absence of definite information it would be premature to conclude that the UN number had been too high, though Geekie acknowledged that preliminary figures did seem to point in that direction. During my most recent visit to Damascus in October and November, Syrian officials provided wildly varying estimates that ranged from 97,000 people (according to Foreign Minister Walid al-Moallem) to 200,000 people (according to al-Assad). On December 11, a Damascus-based source close to the Syrian government insisted, in an email interview, that the UN has allowed itself to be misled by opposition activists and told me that in a final count the total number of civilians in eastern Aleppo “will not exceed 100,000.”
TOPICS:
Human RightsMiddle EastMilitaryRussiaSyriaUnited States

IRIN is an independent, non-profit media organization. IRIN delivers unique, authoritative and independent reporting from the frontlines of crises to inspire and mobilise a more effective humanitarian response.
Posted by Vasundhra at 4:34 AM